Is it okay to have alcohol in your skin care products? Episode 105

Does bee venom cause eye puffiness? 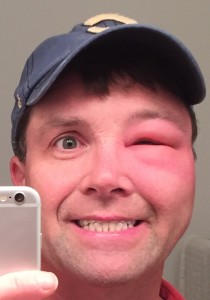 Tune in to listen to Perry’s amazing story to find out. (Hint: check out the picture.)

Is amniotic fluid the next hot anti-aging ingredient?

Have you heard about this new trend in skin care? Amniotic fluid.

Well, at least that is what is being claimed by this story in Stylecaster. Or is it?

The headline to the story is “Amniotic Fluid is a Growing Trend in Skin Car”. So I thought right away that I would be reading a story about amniotic fluid in beauty products. Which seems pretty weird to me. How could they put human tissue in beauty products? I know I’ve heard of placenta being used but that doesn’t really happen in the US.

Upon further reading you see that they talk about two products that are claiming “inspiration” from amniotic fluid. One of the products is from Hourglass Cosmetics. They have a skin active serum that uses a plant-based lipid that is found in high concentrations in amniotic fluid. So, it’s not amniotic fluid that is being used. According to the company, the lipid helps normalize skin cell growth which will apparently counteract signs of aging. Yeah right.

The other product they talk about is from Bilogique Recherché that uses a mix of fatty emollients that simulate vernix which is the waxy coating found on newborns. The cream mask is supposed to protect and recharge stressed skin. Oh brother.

So, despite the headine amniotic fluid is not being used in skin care products for antiaging. And there is no research of which I’m aware that has shown using amniotic fluid will have any anti-wrinkling effects. Save your money people.

Your smartphone can protect you from sunburn

I read an article that says your smartphone can protect you from sunburn. At first I just assumed this is because more people are buying the freakishly huge iPhone 6 plus, attaching it a selfie stick and then and holding it over their to shade them from the sun like an umbrella. It turns out that’s not the case at all. It’s actually an app that alerts you if you’re getting too much sun exposure.

The app is called Solar Cell (aka Sun Zap) and it’s produced in partnership with the National Cancer Center. Essentially it’s a sophisticated reminder system that tells you to spend less time in direct midday sun and encourages you to wear more sun protective clothing and hats. Those are both very common sense approaches to avoiding sun damage skin but they’re also easy to forget.

Apparently the developers have put together a system that effectively prompts you toward these good behaviors. Some proof that this works is available in the form of two clinical studies which where published in JAMA Dermatology. Here are the numbers: In the first study, 454 participants completed a survey, 305 were assigned to download and use the app, and 125 actually did it.

Since the base size was fairly small, the results showed that the people in the app group spent more time in the shade. But comparing within the app group they found that those who used it (vs those who didn’t) were more likely to wear protective clothing and to spend less time in the midday sun. This was surprising though – app users reported using LESS sunscreen. That seems counter intuitive but maybe they thought they needed less sunscreen because they spent less time in the sun.

The second study was identical in design (but with fewer people) and showed similar results. Another odd finding though: using the app didnt reduce the panelists chances of getting sunburn. (there were too few cases for the app to make a difference, said the researchers.)

I’m still not completely convinced that this will work as stated and it’s certainly not a full proof system but anything that increases your awareness and gets you to shield yourself from the sun can’t be a bad idea.

Is this new sunscreen technology an improvement?

Researchers at Yale university have developed a sunscreen that doesn’t penetrate the skin which, according to them, would eliminate a serious concern about commercial sunscreens.

They reported their findings in the journal Nature Materials. According to the researchers they found that the material they developed blocks damaging UV light and it isn’t easily removed from skin.

They also get into a claim that standard sunscreen ingredients like the organic molecules approved by the FDA can cause damage by creating reactive oxygen species. He says if these ingredient penetrate deep enough they could potentially facilitate skin cancer. That’s right, they are claiming the sunscreens can cause skin cancer. That is just over the top and there is zero evidence this is the case.

This story shows the naivette of university researchers. First, sunscreens don’t penetrate skin to a significant amount. Second, they aren’t associated with higher rates of cancer. And third, why don’t they just use nanoparticle sized versions of zinc oxide or titanium dioxide?

Their ingredient is a hydrophobic chemical called padimate O which is encased in a nanoparticle.

We’ll see if this goes any where. It seems like they are solving a problem that doesn’t really exist.

According to Cosmetics Design, Balanda Atis who is head of L’Oréal’s Women of Color Lab, has “revolutionized makeup” for women from an array of backgrounds. How did she do this? By using a colorant that they said is “rarely” used in their formulations she was able to create makeup that can better match deep skin tones. Typically, makeup for women of color is too red or too pale. But about 10 years ago she began to work on her own solution and Balanda, who says that “We’re always looking at new colorants and other raw materials” found that incorporation Ultramarine Blue into makeup solved the problem. The VP of the division described her discovery as “game changing.”

I’m baffled by this because Ultramarine Blue is an approved colorant and has been used for YEARS. I used it to formulate color cosmetics back in the mid-1980s. So clearly, her breakthrough was not figuring out a new, innovative raw material. It must have more to do with the way she blended it with other colors? I’m mean I’m impressed and all I just don’t really understand it.

So Balanda, if you’re listening to this, please get in touch with us and help us understand.

Should there be alcohol in your skin care?

Shall we talk about the kerfuffle we had with our good friends over at Paula’s choice about alcohol in skin products?

Their position is that the study we referenced doesn’t represent how people actually use alcohol containing products. They say that the alcohol products were meant to be left on the skin and the study doesn’t reflect that usage. They also say that high amounts of alcohol in skin products cause accumulative damage. I’m not convinced.

While the study we referred to does not represent how people normally use cosmetics, it does represent skin exposure to alcohol and demonstrates a worst case scenario. If the pure ingredient applied to skin for a long time does not demonstrate significant irritation, there should be little concern about using a formula that has the ingredient blended with other ingredients. Adding ethanol at reasonable levels allows formulators to combine ingredients that may otherwise not be included. We haven’t seen any convincing evidence that consumers who use products formulated with alcohol in this way are harming their skin.

Podcast_Listener_28 says…Thank you for informative easy to listen podcast that combines beauty and brutal honesty. After Paula Begoun stopped producing her be beautifully podcast last year, I couldn’t find one I could trust. Now I do, thank you.

JK just trolling says…I’ve learned so much from the beauty brains that I should be paying them instead of my dermatologist. This podcast is a 5 star podcast except for Perry’s voice. Just kidding – even that’s great and makes for fodder for some of their signature banter.

Previous post: How do you moisturize curly hair? Episode 104