Is the No-Poo method safe for hair and scalp?

Our FaceBook page was abuzz recently over this HuffPo article on the woman who hasn’t washed her hair in 5 years.  If you really did NOTHING to clean your hair and scalp, would that be bad for you?

Trichologist and fellow cosmetic scientist, Tony Maleedy, weighed in on the debate with this analysis:

“What many people seem to forget is that underneath all that hair is the scalp and not washing your hair is, clearly, also not washing your scalp. The scalp on a typical head has a surface area of approximately 600 sq cm, or about 7% of the total skin surface. This particular area of the skin differs from others in that it contains very large sebaceous glands (the oil producing glands in the sides of the hair follicles) which secrete large quantities of oil (sebum) onto the surface of the scalp.”

A fungus among us

“Sebum is composed of fatty acids which are the food source of a fungus called Malassezia Globosa. This fungus is always present on the scalp, but when the level of sebum increases the fungus proliferates resulting in scalp itching, tenderness, flaking, inflammation, spots, dandruff, seborrheic dermatitis and other problems. Washing the hair and scalp with shampoo controls the level of sebum on the scalp and reduces the chances of scalp disorders developing. All these problems are commonly seen when hair is not washed frequently.

Another factor is that as the Malassezia Globosa fungus breaks down the oil it gives off an unpleasant odour, which may not be noticed by the person themselves but almost certainly by other people.”

Tony was kind enough to share this electron micrograph of hair (click the image to enlarge. Go ahead, it’s pretty cool): 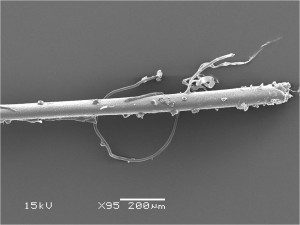 “As some people seem to think it’s a good idea not to wash their hair I was wondering if you would like to see just one example of a standard hair not washed for five days. This micrograph was taken at the University of Bath in the UK (x 95 magnification). Most of the debris is dust and dead skins cells and we think the longer fibre may be wool, attached perhaps as the person took a jumper off.”

To be totally transparent, Tony does market his own line of shampoo and other hair care products (which you can find at tonymaleedyhair.com).

What do YOU think? Have you tried skipping shampoo? How long have you gone? Leave a comment and share your experience with the rest of the Beauty Brains community.