Can Pantene reverse the damage of 100 blow drys? Episode 70

Listen to this week’s show to learn how shampoo can fix blow dry damage. Plus, more Beauty Science News!

Claim to Fame: Can Pantene reverse the damage of 100 blow drys? 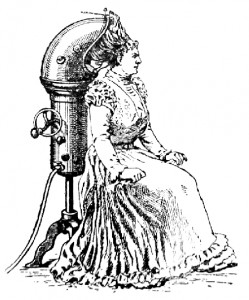 This is a new feature where we look at the claims of popular beauty products and explain what the claim really means, how the company might support the claim, and most importantly, if the claim really makes enough of a difference for you to buy the product. Today we’re talking about Pantene Nourishing Shampoo. Here’s the claim:

Of course there’s always an asterisk:

What does the claim mean?

Erasing damage from blow drying is a big deal because blow drying after washing can cause all kinds of problems: cracked and uplifted cuticles, increased split ends, loss of tensile strength, dullness, rough feeling hair, loss or rearrangment of hair lipids that help keep it healthy, and so on. Are they saying this product erases ALL of these kinds of damage?

No. Because at the core of this claim is the statement that it “erases damage…for silky hair.” So you could argue that they’ve defined damage very narrowly: damage is really the absence of silkiness and if you make the hair silky it’s no longer damaged – at least that’s one possible interpretation.

How could they support the claim?

You can say pretty much whatever you want in a cosmetic claim as long as you have data that you believe adequately supports your assertion. If you’re just making the claim on your packaging or on your website, then that’s all you have to do. But, if you’re running an ad through some media outlet, they may ask to see your support data before allowing your ad to air. So, you have to convince the TV station or whoever it is that your approach is sound. If they agree with your assessment, they’ll air the ad. If they disagree you’ll have to either generate more data or you’ll have to change the ad.

Once your ad is “out in the wild” there are a couple of things that can happen. No one may ever question anything you said in which case you’re scott free. OR, you can be challenged either by a consumer, another company, a regulatory body or an NGO (Non Governmental Organization). If that happens you have to go through a fairly rigorous review of your data to ensure it supports the claim to their satisfaction or the satisfaction of whoever is adjucating the complaint.  So how might they support this specific claim?

Here’s the kind of support that I would GUESS they have:
1. Take two sets of tresses – one set is the “test set” and the other is the “control” set. Wash and blow dry both sets 100 times using some standard procedure. (Note: They may also be comparing the test and control to a third set of tresses that is kept in “virgin” condition.)

3. Run a “silkiness” test on both sets. This test could be an instrumental test to measure the force required to detangle and comb hair, it could be a consumer perception test where you let people feel the tresses and give their subjective rating of silkiness.

Results: As long as the test and control sets (and perhaps the “virgin” set) are rated about equally “silky” the claim is supported. Because of the way the claim is worded they don’t have to prove that their product erases ALL the kinds of damage that blow drying can cause.

Should you buy the product based on this claim?

Pantene is a reasonably priced product with a good reputation so you don’t have much to lose if you think this claim is compelling and you want to buy this product. But if this were a very expensive salon brand, should this claim make you buy it? Probably not because they don’t compare it to anything (besides non-conditioning shampoo.) If this product cost $100 per bottle and they established that it works better than anything else on the market, then MAYBE the claim would be a good reason to spend your hard earned money. But even then, based on the way the claim is worded, all you really know is that the product makes your hair more silky. It doesn’t have to erase any other kind of damage in order to live up to that claim. I have a hard time believing this claim is very meaningful.

Thanks to the following listeners for reviewing us on iTunes! It REALLY helps us if you can post a review, click here to review the Beauty Brains podcast on iTunes.

Makeup is not the key to attractiveness
People apply color cosmetics hoping to improve the way they look. But according to this research published in the The Quarterly Journal of Experimental Psychology, most people don’t know what they are doing and are applying too much.  In the study 44 women participated as models. They were first photographed with their hair back wearing no makeup or facial jewelry. They were then given a tray of popular color cosmetics and told to apply makeup such that they were going out somewhere fancy for the night. After this, their pictures were taken again. A range of photos were created using the “no make-up” and “with make-up” as the high and low points of the scale. 22 male and 22 female participants were then stationed at a computer and asked to optimize the attractiveness of the given faces. Researcher found that both men and women preferred the look of women with less makeup than applied. Women liked the appearance of slightly more makeup than men. While this is an interesting study, I don’t think looking at pictures is a good way to evaluate the attractiveness of someone. How many people do you know who look great in real life but don’t take good pictures? I think most people are more attractive in real life.  Anyway, what this research suggests is that people who put on a lot of makeup can probably put on less. It also shows that some makeup definitely helps everyone look better and that is something of which we cosmetic chemists can be proud.

Is Gwyneth Paltrow wrong about everything?
Celebrities have been spokes-people for beauty products since the early days of the industry. But more recently celebrities have started spreading their own beauty and health advice – some of which is rather bizarre. Now there’s a new book that has taken a skeptical look at some of the bunk that is being spread by these celebrities.  I love the title the book which is “Is Gwyneth Paltrow Wrong About Everything?”

The author, Tim Caulfield, is an attorney for Health Law Institute at the University of Alberta in Canada. Tim says that beauty is a science free zone. It certainly is when it comes to all the dreck that’s put out by celebrities and by many beauty bloggers by the way.  The book looks at different celebrity beauty claims and then hunts for scientific evidence to support those claims. Tim comes to some of the same conclusions that we’ve been preaching here on the Beauty Brains: That “detoxification” is bunk, cleanses are not that likely to provide much benefit other than cleansing your skin, and that expensive beauty regimens are mostly quackery. My two favorite quotes from the book are: “Beauty advice is a science-free zone.” and “Anecdotes and personal testimonials – no matter how compelling …are not good science.”  Caulfield says that rather than believe all this crap you should cleanse your self of pseudoscientific babble, and detoxify your system with scientific evidence. So is Gwyneth Paltrow really wrong about everything? When it comes to the science of health and beauty, the answer, according to Caulfield, is yes.

Unscramble your way to better skin and hair
Here’s an interesting story about protein. Hair in skin are both made primarily of proteins so I’m always looking out for breakthroughs in technology that allow us to manipulate protein and some researchers in California and Australia have done something amazing. They have figured out how to uncook a boiled egg. Think about that – when you boil an egg it denatures the proteins so they coagulate and get all tangled up and the egg completely changes its consistency. Now they can untangle those proteins and return the egg to its original state in just minutes.

So if we can reverse something like the boiling of an egg why couldn’t we reverse some of the structural changes that are made to hair in skin either through the aging process or through external damage? For example could you cross-link or uncross-link double bonds in hair to change it curly or straight? Or maybe we could learn how to change the way to collagen bundles together in skin to prevent or cure wrinkles. These things seem rather far off now but who would’ve thought you could unboiled an egg? God, I love science!

Perry goes off on a food supplement rant. My favorite quote from the article “if this data is accurate, then it is an unbelievably devastating indictment of the industry.”