Sunscreen shaming and other news Episode 85

Have you heard about sunscreen shaming? 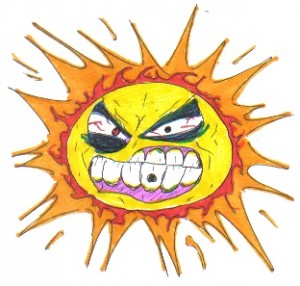 I didn’t either but this is a real thing. There’s an entire discussion thread on the popular site Reddit dedicated to the phenomena.

People must not realize that tan skin is damaged skin or that you can still get sun damage even when it’s cloudy outside.

Here are a couple of the amusing replies from the Reddit discussion board to people who try shaming you for wearing sunscreen.

1. If you’re wearing sunscreen on a cloudy day and someone says something to you just reply “the sun is still only three planets away”

2. When someone says “don’t you want to stop being so pasty?” reply “No, actually I’d rather not get skin cancer”

This is research published in the Journal Cell by a stem cell researcher at the University of Southern California who found out that…If you pluck 200 here’s in a specific pattern 1200 hairs will grow in their place. That’s a sixfold increase. I guess it’s a fivefold net increase because you lose 200 but anyway you get the idea.I believe to date this research has only been going on mice but it certainly seems that it could easily be done on humans as well.

The pattern is a bit perplexing…When plucking the hairs in a low-density pattern from an area exceeding six millimeters in diameter, no hairs regenerated. However, higher-density plucking from circular areas with diameters between three and five millimeters triggered the regeneration of between 450 and 1,300 hairs, including ones outside of the plucked region.

If further research really proves that this works it will be interesting to see how it might translate in the marketplace. Is this a procedure the dermatologists would charge you to do? Or could there be some sort of at home kit version like I could imagine a template that you put on your head and pull your hair through and then you pull out that hairs that are marked on the templates or something like that.

Would you get a shot to get rid of fat?

I think one of the reasons people believe in pseudoscienctifc beauty products is they’re so much more convienent and cheaper than alternatives like plastic surgery. I mean if you have cellulite or puffy eyes or a double chin, sure I’ll spend $50 on this cream but I’m not going to have painful, expensive surgery.

Well good news for those people because The Dermatologic and Ophthalmic Drugs Advisory Committee recommended this week that a new drug called Kybella— a deoxycholic acid (DCA) injection — be approved by the FDA. When injected, DCA breaks down fat cell membranes present in the classic double chin.

Why is L’Oreal printing human skin?

Why is L’Oreal printing human skin? It sounds a little sinister when you ask that question out of context but here’s the deal. 3-D printed human skin is printed on sort of the scaffolding from human skin cells has been a real thing for a little while ago. The new news is that Loriell is teaming up with this company Organovo and the article I saw I was wondering what benefit there would be to Loriell. Organovo has already made headlines with claims that it can 3D-print a human liver but this is its first tie-up with the cosmetics industry.
One of the dermatologists who was interviewed said “I can understand why you would do it for severe burns or trauma but I have no idea what the cosmetic industry will do with it,” I think the quick answer is Loriell is probably trying to use it to help in there toxicological studies. Or perhaps to measure efficacy in reducing transepidermal water loss or elasticity or other such measures. You can imagine how this could help with that.
But certainly you can imagine some long-term goal for the use of printed skin to help somehow cover up or high or regenerate or something skin defects. That kind of application is a bit far-fetched but I certainly a plug them if that’s their far ranging vision.

Alcohol is not drying to skin.

I recently received an email asking me about why a company would include alcohol (denatured) in their skin care formulas. They were under the impression that alcohol caused skin irritation. They are not the only ones as the folks at Paula’s Choice list alcohol as a skin irritant. I had heard this same claim over the years but I’ve also heard the opposite, alcohol does not cause irritation. So I looked into it further.

In 2007, there was research published in the British Journal of Dermatology which looked at the questions “How irritant is alcohol?” In the study they did patch testing with anywhere from 60-100% alcohol and compared it to both a positive control (SLS) and a negative control (water).

Their conclusion – Alcohol did not cause skin irritation.

This was a small study (only 15 people) but if there was a positive result you could have much more confidence that alcohol was an irritant.

Then I found this chapter in the book Infection Control Updates entitled “Skin Irritation Caused by Alcohol Based Hand Rubs.” This is really an excellent reference resource as it goes through the biology of skin and the causes of irritation. But when they looked at alcohol specifically couldn’t find any support for the notion that alcohol caused skin irritation.

So, based on the evidence that I could find you should have no problem including denatured alcohol in your topical skin care formulation (at least in regards to skin irritation).

Water based beauty products are a trend

Here’s an interesting “trend” in skin care….water based products. The market has recently been flooded with products touting the different kind of water they are based on. There are cleansing waters, or micellar waters, that are big in France.

Then there are water based sleeping masks. Nitrogen has a Hydroboost water gel.

The idea is that the water is quick absorbing and less harsh.

It sounds like the idea to me is that some marketer just learned a different way to talk about the same old products. Probably, 80% of skin products are “water based”. It might be even higher. This is totally marketing hype and there is nothing special about the type of water that these products are using.

Next post: Are anti-wrinkle pillows good for anti-aging? Episode 86

Previous post: Depilatory or bleach – which is better for hair removal?