Is Hoof Maker cream for horses really good for your nails? Episode 111

Support the Beauty Brains by signing up for a free trial at Audible.com 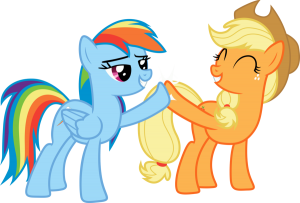 Sarah asks…I have some questions about Dr. Varon’s skin bleaching system. It uses 2% hydroquinone. Is it safe to keep using?

First let’s talk about skin bleaching actives. Hydroquinone, like many other actives, HQ ,like many skin lightening ingredients, is a phenolic compound. That means it contains a 6 carbon ring with an OH group attached. This structure allows it to inhibit melanin synthesis by acting as a substrate for tyrosinase.

Tyrosine, an amino acid, is acted upon by the enzyme tyrosine to form melanin. These phenolic compounds “interrupt” this reaction by giving the tyrosine something else to attach to. That way the tyrosine never makes melanin particles. Based on the research we’ve seen, nothing works better than HQ – it’s considered the gold standard for skin lightening. You can find more details if you go back and check out Episode 35.

Is HQ safe? There have been studies that raised cancer concerns but they were based on oral or injected application and there have been no clinical studies or cases of skin cancer related to topical HQ use. Therefore, the International Agency for Research on Cancer (IARC) considers hydroquinone as “not classifiable” as to its carcinogenicity in humans. It can, however, cause a skin discoloring condition known as Och-ron-osis and that’s one of reasons that regulatory bodies in other countries have banned HQ for over the counter use. It has has to be prescribed by a doctor which helps prevent the kind of long term abuse that can lead to that permanent discoloration.

In the US The Food and Drug Administration (FDA) has even proposed banning over-the counter skin bleaching agents containing hydroquinone but as of right now it’s still available.

This is a very important point – it’s a myth that’s it’s “banned” in other countries, it’s really just restricted to prescription use. Europe and Asia currently allow hydroquinone at 2-5% concentration by prescription. The drug is valued worldwide but is regulated to protect against misuse and bad formulations.

So, what about Dr Varon’s product? We were intrigued when we read about his Skin Bleaching system which claims to be “the first and only skin care system to remove blemishes and dark discolorations from the skin.” It’s inconceivable how they can make such a claim since HQ is an over the counter drug. That makes me very suspicious.

The system costs about 20 bucks which isn’t too bad until you realize you only get one 1 oz tube of each product. But you don’t use them up at the same rate. You’re supposed to use the Brightening lotion twice per day, the Dermal Treatment you use once a day and the Liquid Microderm product you use 2 or 3 times per week. So very quickly you’ll run out of the main product and you’ll have to buy the entire kit to get more. You’re probably better off buying another 2% HQ cream and then using other products.

Is it safe? Yes, aside from the concerns we just discussed. Is it the best product to buy? Probably not.

Is Hoof Maker cream for horses really good for your nails?

Kim’s question…Is Hoof maker for horses really good for finger nails? If it’s just a good moisturizer can you recommend another product that would work as well?

I checked out the Hoof Maker website and found that it’s made by the same company that makes Mane and Tail. The theme is the same across all these products and it goes something like this “we originally made these products to take care of horses but amazingly people put them on their hair and skin and found out that they are incredible.”

It’s certainly an interesting backstory but when you look at the specific claims they make for this Hoof Maker product it’s really not that remarkable. Here’s what they say:

“Now you can discover the mystery behind luxuriously soft skin and beautiful nails. The exclusive combination of intensive protein enriched ingredients enables your hands and body to achieve a natural feel while moisturizing dry and cracked skin. Originally developed for horses to moisturize dry, cracked, brittle hooves. Since applied to the hoof by human hands, over time many of those using Hoofmaker on their horses noticed dramatic improvement in the condition of their hands and nails.”

Here are some of their specific claims:

I took a look at the ingredients and expected this to be just another typical moisturizing formulation. However, I was surprised to find that it uses some fairly unconventional ingredients.

In a standard moisturizer you’d expect to find occlusive agents like petrolatum or mineral oil along with perhaps some hydrating agents like glycerin or hyaluronic acid or some other humectant. This product doesn’t use any of those occlusive agents. Instead its main ingredient is a chloride Quat, specifically distearyldimonium chloride.

This approach actually makes sense since it’s designed for nails rather than skin. Skin can be hydrated by locking in moisture but nails are a little bit different. So, rather than using an occlusive , the main ingredient is a fatty chloride quat, distearyldimonium chloride. I’ve seen this used before because it has a positive charge and can stick to skin. The product also appears to contain a good percentage of glycerin which should help bind moisture to the nail.

And lastly it contains a lactate salt which is good for nails in the same with lactic acid is good.

The only ingredient that seems to be missing that could make this product even better is some form of urea.

So all things being considered this is substantially different than a typical skin was to rising lotion. But to Kim’s question then how can you find a similar product that has a different scent. We did find a couple of other products that use a similar matrix of ingredients. Here they are.

Is Hexinol the latest anti-aging miracle?

Priyasha says…I was curious about this “Hexinol” technology range that the ROC brand has been marketing. They say it’s a brand new anti-aging technology they discovered. What exactly this hexinol technology is, and if in fact its just a silly anti-aging “ingredient” gimmick or if there is something substantial here.

Here’s some info from the website for RoC which, by the way, is owned by J&J…

“After 7 years of research, RoC® Skincare scientists discovered a molecule that would impact signs of aging skin. This was the birth of HEXINOL® technology…it targets skin concerns associated with aging in a different way than other anti-aging ingredients.”

Here are some specific claims they make:

We reviewed the ingredient lists for a couple of the ROC products and found that Hexinol is really just their trademarked name for the ingredient Hexylresorcinol.

(BTW, scientists must have HATED this because of the name. First of all hexinol sounds almost exactly like “hexanol” which is a different chemical, the alcohol made from hexane, which has nothing to do with anti-aging. Second, the “hex” name makes it sound like magic.)

So, what the heck is hexylresorcinol? You might be familiar with it because its been used for a long time as an antiseptic in products like mouthwashes and throat lozenges. But recently it’s also been shown to have skin lightening properties.

I don’t know if HR was discovered by J&J because other companies use this stuff, most notably Clarins. It’s sold by a company named Sytheon and I don’t believe there’s anything proprietary about it. Their trade is Synovia HR and their website does document three clinical tests that indicate the molecule has anti-aging properties:

First, in vitro testing shows HR inhibits the production of melanin (36% intercellular and 75% extracellular.) However, the test didn’t compare it to anything so I don’t know what that means.

Second, another in vitro test measured inhibition of the enzymes that convert tyrosine to melanin. This was done against other proven skin lightening actives and the results showed that HR is better than hydroquinone, licorice and kojic acid.

Third is a human clinical study comparing HR at 0.5% to hydroquinone at 2%. The tests measured two kinds of results.

The first result showed a higher ITA which stands for Individual Typography Angle. A higher ITA indicates better skin brightening. HR showed an improvement that’s about equivalent to HQ but since it only took 0.5% HR to get the same effect at 2% HQ they get to claim that HR is “4x more effective than HR.” That seems a bit misleading to me because it implies that it makes skin 4 times lighter than HQ and that’s not the case at all.

The second result was labeled simply as “% improvement in skin brightening” which doesn’t tell us anything about how the test was done. In any event, HR did about as well as HQ.

When looking for evidence of how an ingredient works you never want to exclusively rely on information from the supplier so we found that HR has been reviewed by other evidence-based beauty blogs like the Cosmetic Cop and Truth in Aging. Here’s what Paula Begon says…

“Hexylresorcinol is a synthetic ingredient that has been shown to have skin lightening ability in cell cultures but there is very limited research about it on skin. It is mostly an antioxidant, antiseptic and anesthetic.”

“This study is often quoted as saying it worked better than or as well as 4% hydroquinone but 4 weeks is not long enough to judge that and again, and this was not about hexylresorcinol itself .”

”HR’s ability to target pathways in the skin that lead to hyperpigmentation has propelled it into the skin lightening ingredient category. There is also thought that Hexylresorcinol has more benefits as well, including an ability to reduce the appearance of fine lines and wrinkles, increase protection against UVB and UVA rays, and improve the skin’s barrier against pollution and sun exposure.”

Unfortunately, the link to a source of their information didn’t work so I’m not sure where that info came from. (But I see that the supplier’s website makes some of these same claims.)

What’s the bottom line about HR? It appears to be a promising ingredient but we haven’t seen enough evidence to suggest that it’s better than other proven alternatives. If you’re looking for something new to try and you don’t mind the price, then I don’t see any reason not to give Hexinol a chance.

Kublakaan says….I love their nerdy, scientific, non-biased way of explaining the good and bad of beauty products. They obviously have a firm grasp on statistical analysis, data analysis, and obviously chemistry.  Despite all the hard science, they’re is easy to understand, and even funny. I’m a much wiser and selective consumer now that I can better spot the marketing traps that beauty companies use to milk us of our money!

I read an article on 6 crazy spa treatments but they just weren’t crazy enough. So I made up one of my own. You guys have to guess which is the fake.

Chicken soup sauna
One Spa chain in the southern US will soak you in warm chicken soup which is rich in fats and proteins that nourish the skin.

Butter bath
In Ethiopian spas, women moisturize skin by rubbing butter all over your body and then melting it away with smoke.

Listen to the show for the answer!

Previous post: Why is Moroccan oil such a big deal in hair and skin products? Episode 110