Should you wear anti-aging lingerie? Episode 112 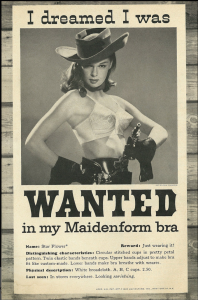 I saw this story published on the cosmetic surgery times website asking the question whether nutricosmetics is real science or scientific rhetoric. Or as we called it a few shows back “sciencesplotation”.

First a definition of nutricosmetics. These are supplements that supposedly can help support skin, hair and nail health. It is a group of products that play into the old saying, you are what you eat. In cosmetic industry marketing speak it’s referred to as the “beauty from within” trend. So we’re talking about pills, probiotic foods, vitamin water and things like this that you are supposed to invest to get a beauty benefit.

Anyway, this article looked at whether these products can actually help your skin or hair in general. And for their experts they talked to a few dermatologists. Here is what they said.

Dr Jeanette Jacknin wrote a book called Smart Medicine for Your Skin and she says that nutricosmetics don’t work alone but instead work together with a healthy diet, sun protection and avoidance of environmental pollutants, stress reduction and topical antioxidants. Of course if you’re doing all that how would you ever see any benefit from a nutricosmetic?

Dr Joel Schlessinger cautioned that since supplements are not highly regulated there are fringe products that don’t contain what they claim and don’t work as they claim. Unfortunately, consumers have no way of knowing who is reputable and who is a fringe product.

Dr Jacknin is convinced that many of these supplements have documented skin repair and anti-oxidant properties but she says companies don’t want to share the results because if it was shown that something had an effect, it would be considered to be a drug by the FDA and would be more highly regulated. It’s important to note that the more “highly regulated” means that the company would have to conduct two types of studies, efficacy studies to prove that it works (and quantify the effect) and safety studies to prove that the product is safe to use. It’s scary to think that consumers could be taking products that have an unknown effect and unknown safety profile.

Then the doctors gives some advice which I think is strange. Dr Jacknin says that nutricosmetics are right for people who are otherwise generally healthy and don’t have internal issues like gastrointestinal, kidney or liver problems. And Dr Schlesinger says that despite the fact that some supplements have clear negative effects (like causing acne in teenagers) he thinks that there are still benefits to taking them.

I call this advice strange because given the information we know, it’s doesn’t seem reasonable. Consider this about these supplement products.

1. The FDA does not regulate product safety so there is no guarantee what’s listed on the bottle is what is in the bottle or that the product is even safe.

2. The FDA does not regulate claims so there is no assurance that amy testing has been done to show that what the company says the product can do, it does.

3. And finally, there is scant published evidence that these supplements have any positive effect under real use conditions.

With these facts in mind, I don’t know what convinces these dermatologists that using supplements for improving skin and hair is a good idea. I certainly don’t.

Here’s a story that touches on a pet peeve of mine: I hate when companies say you need skin care anti-aging ingredients like Collagen or vitamins or whatever in hair care products. It’s not like hair is alive. If you would have told me that your hair needs antioxidants I would have laughed at you. But, now there’s evidence that antioxidants may actually help hair. Here’s how it works…

Hair absorbs copper ions from water and I suppose some of it could be produced by biological processes. The problem is that copper can participate in free radical formation especially when exposed to UV light. We know that in skin, free radicals are damaging to certain biological processes but they can also damage the non-living protein in hair. It’s not like it’s going to give you hair cancer or anything like that but it certainly could weaken some of the protein chains which would result in increased breakage more frizzy hair less shine, etc.

So the question becomes how do you get rid of copper? Their solution is to grab it up with a compound called a chelating agent. The use of chelating agents in hair and skin care formulations is certainly not new in fact there is one called EDTA that is used in many many formulations because it helps strengthen the preservative systems. The clever scientists at P&G may even have a better alternative because they’re using something called EDDS which is Ethylenediamine-N,N’-disuccinic acid it’s a biodegradable alternative to EDTA. Anyway they have done a ton of research on women across the world to measure copper levels in their hair and they’ve shown they can reduce those copper levels so it seems they have done their homework. (Which is why you see Pantene talking about “antioxidant technology.”)

There’s just one thing that bothers me about this. How much of hair damage is caused by free radical generation compared to the amount that’s caused by daily washing and drying and brushing and combing and chemical processing like coloring and straightening? I’m just wondering if free radicals are a cause of a significant portion of her damage or if their effect is real but it’s actually overwhelmed by all the other sorts of damage that is done to your hair.

Can your beauty routine boost your love life?

Can your beauty routine boost your love life? This recent study from Fordham University, sponsored by Revlon, says it can, at least for women. In fact, this study found that in just four days of following a beauty ritual a variety of things happened to women in the study.

So, what was this beauty routine or ritual that got these amazing results?

The ritual involved having subjects take time to appreciate themselves by looking in the mirror, applying fragrance and eye makeup, enjoying a mint or chocolate, applying lipstick, taking a deep breath and smiling. So if you start doing that each day it’s going to make you feel better about yourself.

No kidding. I can’t believe this kind of thing gets passed off as a “study”.

My biggest problem is that there is no control, there is no quantification, there is no definition for terms, and this is just feel good news meant to convince people that they are supposed to use more makeup. What’s most troubling is that this isn’t science and it gets reported as if it were.

Yes, having a beauty routine will make you feel better (at least for a little while). So do it. But don’t expect it to have any long lasting impact on yourself or lead to any significant boost in your love life. It won’t.

Can this skin lotion keep you warm?

The product is actually called “Cold Screen” and it comes from a start up company called U°Thermic. The founders, who are out of New Zealand, are crowdfunding to raise money to develop the product. They claim

“Coldscreen works by creating an ultra light film over the skin to help keep your body’s natural heat in, while allowing the body to still function at its optimal levels. It creates a warming feeling by interacting with receptors just under the skin that tell the brain that you are experiencing the sensation of warmth. This occurs naturally in the body anyway, Coldscreen simply allows this same bodily function to occur at a lower temperature allowing you to feel warm in colder environments.”

“no harmful chemicals and a high percentage of safe, healthy and also natural raw ingredients”
It lasts “Anywhere from 2 – 4 hours depending on outside ambient temperature and activity levels.”

How realistic is this? I can think of two approaches to deliver warmth from a body lotion.

1. “HELPS keep your body’s natural heat in” – well, your body cools itself through evaporation so I suppose that any occlusive agent could in theory help keep the body’s natural heat in. Two problems with this – the degree of heat your body loses is substantial and I would imagine it would take a very thick insulate layer to have any effect. Second, it’s only going to work where you apply it – you lose a lot of heat through the top of your head, for example.

2. “Creates a warming feeling by interacting with receptors”
Offhand, I know of two technologies that could do this. There are certain materials, most notably glycols, that react exothermically with water. In other words, when they mix with water heat is released. This product could contain such a glycol which would give you a warming sensation when it comes in contact with the moisture in your skin. I think this would be faint at best.

OR it could contain something like a capsacian which is the active ingredient in hot peppers, which can react with skin sensors to give a chemically-induced sensation of heat. The problem is that can also be irritating to skin.

Bottom line is: I think this could work to some extent. It would be rather unbelievable to think it could work well enough so you didn’t need to “wear bulky layers of extra clothing to stay warm” which is something else that they claim on their website.

Well, the beauty website Fashionista did an interview with him and got his “secret” to having good looking skin. His advice…use an eye cream twice a day, once in the morning and once at night. He says he used Ponds just like his grandmother. But he also likes Olay and the Art of Shaving. In reading the interview what strikes me most is at times he is not skeptical. He talked about a Moroccan Oil product and how a neuroscientist friend of his who used that product had great hair. And even the advice that because he uses eye cream that must have had an effect.

Would you wear anti-aging lingerie?

Textile maker Teijin Limited will now sell a lingerie that can help moisturize and soothe the wearer’s skin.

According to them the products will be made with a fabric infused with magic acid. They say it will help the skin retain a low acidity level even when the person is sweating or the air is dry. This will help prevent rashes and the growth of microbes.

Additionally, they have created the product in such a way that the magic acid does not get washed out. It remains effective even after 50 washes.

Now, I know malic acid is classified as an Alpha Hydroxy Acid and these can have beneficial effects on skin exfoliation but it seems weird to me that this technology would work. I especially don’t see how it can work over the long term. Think about how it’s applied to the skin. The surface layer of the acid will get used up….

Anyway, this is interesting. I’d love to see a real study done with this technology comparing skin wearing the garment rather than not. And while the first application is to women’s lingerie that is going to have only a minimal appeal to men. I would see this technology being of more interest to men than women and men seem less interested in having to apply products to get a beauty benefit than women. I would certainly wear products like this if they worked and were easily available.

Next post: Should you buy Organic Botox from Kim Kardashian? Episode 113