Can hair really be sensitive to protein? Episode 139

Is the NIOD brand really “ultra-scientific?” 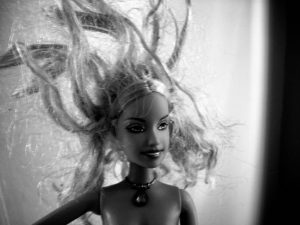 Saania says…I have a question about a skincare brand that’s gained a cult status amongst serious skin care junkies. The brand NIOD, under the umbrella brand Deciem, claims to be “skincare for the hyper-educated”.  Their star product is called Copper Amino Isolate Serum. I wanted to know what you thought about the science behind this serum, as well as some of their other super sciency sounding products and claims.

I was not familiar with this company so I had to do a little research on Deciem. The first thing I found was the company tagline which is…

“WE ARE ABNORMAL. NO, SERIOUSLY. WE ARE REALLY NOT KIDDING.”

I also found out that Deciem was started in 2013 and that now the company owns 10 different brands, one of which is NIOD which stands for “Non-invasive Options in Dermal Science.” The others include Hylamide, Grow Gorgeous (proven to make hair visibly longer, fuller and thicker), Inhibitif (all about hair removal), and White Rx (which is “ultra-scientific leader in skin care pigmentation.)

I’m not sure what their credentials are but I’ve never seen any leader in the industry refer to themselves as “ultra-scientific.”

But you asked specifically about their Copper Amino Isolate serum so let’s talk about that. Here are some of the claims from their website:

“This product contains 5.0% pure Copper Tripeptide-1 (GHK-Cu) to be mixed with a specialized activator before first use.

“In short, the skin will act and look younger starting within 5 days with continued improvements over time.”

“Superb award-winning technology to stabilize and enhance the activation of copper peptides.”

Okay, let’s break this down. First of all, peptides are quite commonly used in anti-aging products. We’ve talked about peptides as anti-aging ingredients back in Episode 55 where we explained there are 4 basic types. Copper Tripeptide belongs to the type known as “Carrier Peptides” which deliver trace elements, like copper and magnesium, which help with wound repair and enzymatic processes. These trace elements have been shown to improve pro-collagen synthesis, elasticity of skin, and overall skin appearance.

I don’t see anything in their claims that seem highly unreasonable. The product probably does what they say it does but there’s no indication that it works any better than any other product containing copper peptide at a similar concentration. I should also mention that the product costs $200 for 15 mls and you’re instructed to use it twice daily. I wonder how long that bottle will last…3 or 4 weeks? That’s $200 per month!

What about the “superb award-winning technology?” Have they received some sort of “Nobel Prize” for their “ultra-science?” Not quite. We contacted to ask them about the award and we were specifically told that this product won “Tatler’s Best Serum” award. Tatler, in case you didn’t know, is a UK based website published by Conde Nast. I couldn’t tell if the website just picks the winners or if they have consumers vote. Either way it’s just a popularity contest of sorts, which is fine, but this is not any kind of independent validation of their technology.

Finally, what about this notion that the product can “stabilize and enhance the activation of copper peptides?” The product is a two part system that requires mixing to “activate.” We also asked the company about this and here’s their response:

“Copper Peptides on their own are very reactive to even the smallest variations in pH. Since they are only soluble in water, even the most precise formulations will lead to pH variations once water is present abundantly enough to solubilize the peptides. The activation step involves saturating the pure peptides with sufficient water for complete solubility (the activator contains a very high percentage of low-molecular hyaluronic acid as well to draw the water in quickly upon application) at time of use. There’s near 95% stability after 6 months of use but we encourage use within 3-6 months of mixing.”

Two phase systems are commonly used to stabilize ingredients which may not be compatible. Typically you need to mix the two parts together right before using the product but in this case the mixture is stable for up to 6 months. That sounds good but it doesn’t quite make sense chemically. If the peptides are that sensitive to pH changes then you’d need to use the product right away. I don’t really understand this.

The bottom line is that this product uses an active anti-aging ingredient that does have SOME data showing it works. This may be a great product but unfortunately I don’t see anything that would indicate it’s worth the high price.

Is the Makeup Eraser cloth worth it?

Babis asks..I wonder if you guys know what is the technology behind Makeup Eraser – that towel that promises to remove makeup only by soaking it in warm water and rubbing in the face? Is it true and how can a simple watered towel be as efficient as a regular remover?

As Babis points out, this is essentially a towel that removes makeup without the need for additional cleansers. Here’s what the website says:

Is there any special technology at work here? I contacted the company and a representative told me…

“the cloth is a proprietary blend of 100% polyester. The fibers are so fine that they pull makeup away from the face.”
“So it’s all in the fibers! No added chemicals. All you need to do is add water to activate the fibers and the MakeUp Eraser removes all types of makeup.”

This does make some sense – a wet towel does have some cleansing efficacy and to some extent that can be optimized by configuring the fibers on the cloth.

Babis wanted to know how can it be as efficient as a regular remover. The company doesn’t say that it is, as far as I can tell. When I specifically asked how the cloth compares to conventional cleansers they said that “it’s reusable. Throw it in the wash and no stains remain. The MakeUp Eraser will last up to 1,000 washes and eliminates the need to buy disposable product to remove your makeup.”

So it’s “better” because it’s more convenient or because it saves you money. I’m curious if anyone has tried this thing to see how well it works. But regardless, if this convenience appeals to you it may be worth a try.

How do you get bubbles in hair gel?

Bobbi asks…I’ve been using a clear hair gel with bubbles. How do they get the bubbles to stay in there?

It’s funny – we’ve worked on products that needed to be absolutely clear with no bubbles and other products that have to filled with bubbles!

Creating the bubbles is the easy part – the basic way is to stir the batch more vigorously which incorporates more air. But the more controlled process is to introduce an air line that shoots a steady stream of compressed air into the batch.

The real trick is getting the bubbles to stay there. Part of it has to do with the thickness of the formula – obviously thicker products don’t flow as easily and they trap gas bubbles better. But you also need to add a special type of rheology builder that gives the gel more structure without making it too thick. These are typically based on acrylic polymers.

Ryan in Forum…Hello, I’ve heard that too much protein can be bad for hair and cause it to become dry and eventually break off. I have a conditioner called Abba gentle conditioner that has protein but when I use it my hair looks and feels great. So is there any truth to this?

This notion that too much protein is bad for your hair comes up quite often. I’ve even heard the concern raised that you can have “protein sensitive hair.” But when you look at the science there’s no mechanism for topically applied protein causing hair to break. So what’s going on here?

I think this myth got its start from the relaxed hair community. People with African-American hair often relax it which can be VERY damaging. The relaxation process breaks the disulfide bonds in hair which makes the hair more porous. Hair that is extremely porous can soak up too much of the quats, fatty alcohols, and silicones from regular conditioners. This over-absorption makes hair feel mushy. So, special conditioners where developed for relaxed hair that contain LOWER levels of these ingredients. These are often referred to as “protein conditioners” because they contain (sometimes high) levels of proteins. Since the proteins don’t provide as much conditioning, it’s possible that the lower level of conditioning agents (not the higher level of protein) could result in more breakage because the hair wasn’t as lubricated.

This appears to be the origin of the “protein conditioners cause hair to break” meme. From there it spread to the general population so know we have a lot of people believing this and asking the same question. There is one area where proteins MAY be of legitimate concern and that’s where it comes to skin allergies. But that’s a different story.

For what it’s worth, I took a look at the Abba ingredient list. It’s a fairly standard formula based on fatty alcohols and cetrimonium chloride. It does contain several proteins but they appear to be below the 1% line so I doubt they’re really contributing much.

Turn your skin into a touch pad

EU approves old sunscreen, catches up with US

Louise A says…These guys are cosmetic scientists who truly understand what they are talking about. I feel very empowered in using this acquired knowledge. But it’s quite funny hearing them talk about popular culture and social media, it reminds me of my dad (… they kinda get it, but not quite).

Bruiser68 from United Kingdom says…As the owner of a day spa in Birmingham I have learned so much that I can pass on to my clients from these guys. Their knowledge helps to cut through the cosmetic company marketing hype and identify the facts. I just love it – even the cheesy bits!

Next post: Is fabric softener a good hair conditioner? Episode 140