Can I use clay to shampoo my hair? Episode 136

Can I use clay to shampoo my hair? 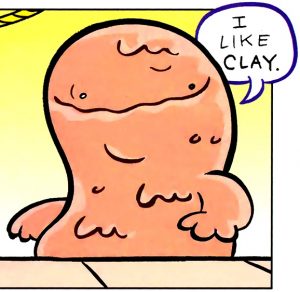 Joneen says…I have a question about rhassoul clay. I’ve heard great things about using it as a shampoo. My concern, though, is mineral buildup. This is one of the results of hard water that has a negative impact on hair, and something I am currently experiencing and want to avoid in the future. I know rhassoul is largely silica and aluminum, but it does have some calcium and magnesium in it, the very same minerals that hard water contains that are so problematic. So it seems to stand to reason that these would also get deposited on the hair from using rhassoul. Is there a scientific reason why it may not cause mineral buildup – i.e. does the large amount of silica somehow prevent the calcium and magnesium from binding to the hair? I will be mixing it with aloe vera juice to create a consistencey that is easy to apply.

We touched on this once before when we talked about an article published on a blog called “The Natural Haven.”  It’s written by a scientist who goes by the name of “JC” and she posted a very interesting piece on evaluating different types of mild cleansers.

So back to Joneen’s question…will rhassoul clay cause mineral buildup? Rhassoul clay comes from the Atlas Mountains of Morocco. (It’s also known as Moroccan lava clay.) It’s primarily composed of a mineral called stevensite and another clay called montmorillonite. It can also contain impurities such as iron, potassium, Al, and other metals. So in part it depends on how purified it is.

It’s interesting to note that there’s a patent covering the use of this clay combined with aloe vera.

It seems unlikely that this would cause a big problem but unfortunately the best answer is that just have to try it and see.

She said she’s already having this problem I presume from rinsing her hair in hard water. Won’t she still have an issue when she rinses her hair after this treatment?

Finally, remember these alternate cleansers like clay won’t do a good job of removing residue from heavy conditioners or styling products.

Why is Redken Pre-Art so good at removing hard water?

Nicole who asks… Why is Redken Pre-Art so good at removing hard water buildup?

She says she has well water which makes her blonde hair turn green. She color treats her hair and the areas that turn green are the more porous, highlighted sections. She’s tried everything to keep the green out and the ONLY thing that’s worked is Redken Pre-Art. She puts the product on her hair under a shower cap waits 30 minutes and then shampoos it out – she can “literally see the green sliding out of my hair.” She wants to know what makes it work like a true miracle?

I looked at the ingredients not expecting to see anything remarkable. But I was surprised to find this really is a unique product. The first four ingredients are: Water, Trisodium HEDTA, citric acid, and PEI-35. It also includes some conditioning agents.

It looks like the magic ingredient is Trisodium HEDTA (if you’re keeping score at home that stands for Trisodium Hydroxy-ethyl-ethylene-diamine-triacetate) which is a chelating agent. That means it’s able to grab onto certain minerals and prevent them from binding to your hair. In this case it’s chelating the copper which is responsible for the green tint. I haven’t seen this ingredient used very much but any product that has it high in the ingredient list should work the same way.

It’s also interesting that it contains PEI (polyethyleneimine) which is an ingredient we’re familiar with from VO5 Hot oil. It’s note worthy because of its high charge density which makes it attracted to hair. In fact, we co-authored a paper titled “Solid‐state Polyelectrolyte Complexes of Branched Poly(ethylenimine) and Sodium Lauryl Sulfate” which was published in the Journal of Macromolecular Science. I’ll put a link in the show notes just in case any of our listeners are BORED OUT OF THEIR MINDS.  Seriously, there’s no way you’d want to read this.

This combination really is unique and it’s got some science behind it so I can see recommending this to anyone who’s got a problem with hard water buildup.

Can I use body lotion to condition my hair?

Grasielle asks…I ran out of hair conditioner, so I used a bit of my body lotion instead, my hair didn’t feel bad afterwards and the lotion smells great. Is it safe to use body lotion on the hair? Or conditioner on the skin? I feel that these products are similar but I have very curly hair and I wouldn’t use my body lotion as a detangler because it’s not slippery enough and conditioner tends to leave a soapy feel on the skin. But what if a want to use lotion on my hair once a while after shower, are there any ingredients that are harmful for the hair?

It’s certainly SAFE to use body lotion as a hair conditioner. Whether it works well or not is really up to your personal preference.

Lotions contain emollients, humectants, and occlusive agents that moisturize skin. These are similar to ingredients in leave in conditioners although I’d expect they’d be too heavy/greasy for most people’s hair.
Lotions are less likely to work as a rinse out hair conditioner because the ingredients are not designed to stick to hair after rinsing.

She also asked if it’s safe to use hair conditioner on your skin. In some cases, no. That’s because rinse out conditioners sometimes use higher levels of quaternium ammonium compounds can be irritating if left in contact with skin. These ingredients don’t pose a problem when rinsed out. Leave in conditioners should be safe to leave on your skin but these formulas don’t usually contain the kind of moisturizing agents that your skin needs.
The bottom line is that products are optimized for their intended purpose. It’s usually not a good idea to use something for a different part of the body than it’s meant for.

Is horse oil good for skin?

Wendy says… I’m making my way through the podcasts but I wonder if you’ve gotten to the more… shock-inducing ingredients like snail mucus, bee venom, and horse oil?

We have talked about snail slime and bee venom before but I thought surely this must be a typo. There’s no such thing as horse oil, right? I asked her and she responded: “It’s literally oil that comes from horses fat! It’s one of those ancient chinese remedies for skin-related problems like eczema, skin burns, bug bites, aging). Recently it’s caught on as a current asian beauty trend with some Korean actresses actively endorsing it. The science bit that I see tossed around the most is that the lipid composition of horse oil is similar to human sebum so it’s better absorbed.”

Wow. I can’t believe in this day and age that anyone would market a product with oil from horses. What’s next? Keratin from mashed up kittens? But setting the ethical issues aside for the moment how can we find out if there’s any science behind horse oil being good for skin? It’s easy you just read this technical paper I found: “Composition of horse oil in relation to the fats of other pasture fed animals.” (It’s from a 1949 biochemistry journal, by the way.)

Anyway, it turns out that horse oil consists mostly of a blend of oleic and linoleic acids with some palmitic acid thrown in. Is this really “similar to human sebum so it’s better absorbed?” Well, human sebum does contain a good slug of these fatty acids (about 20 or 30%) but it also contains glycerides, wax esters and cholesterols. So it’s similar-ish but if you really want to use a skin identical oil why wouldn’t you just use one of the many products that contain oils rich in linoliec acid. We did an entire show about rose hip oil for example. There’s no need to hurt a poor little horsey.

By the way, is this one of those examples we’re always hearing about how Korean beauty industry is so advanced compared to the US?

Robots that can wash your hair and brush your teeth
Link
It seems like the industry is obsessed with smart phone apps that can help with your beauty routine but I say screw that. I want to jump right to robots that do my personal care tasks for me.

Ridiculous you say? Then you haven’t seen the work of Swedish robotic pioneer Simone Giertz who’s calls herself, get this, the ”Queen of Sh*tty Robots.” Simone has invented a robotic tooth-brushing helmet and a hair-washing robot made from “a bottle of shampoo, a rubber hand, and a bunch of servos.” The article described as these inventions as “hilariously futile.” There are, of course, YouTube videos of these in action. I think these were tongue in cheek but I’d love to see some enterprising beauty company go into robots big time.

Hanne15 says…This is the best new podcast discovery I’ve made since Serial! Why is it not better known in the beauty blogosphere? Going through the back catalogue now! Thank you!

CageyKid says…These guys are so funny and informative; they really know their stuff (obviously!) and they help their listeners understand the oh-so-confusing world of beauty. They cut through the bs so common in the beauty community with science and humor. Their advice has really helped me cut through the marketing hype and fear mongering I encounter when researching products. Keep up the good work, Randy and Perry!

Next post: Are super foods good for your skin? Episode 137